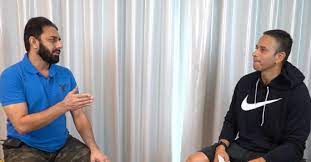 New Delhi, 17/6 (AO Bureau): Former Pakistan off-spinner Saeed Ajmal Funny Interview implicated many batsmen in his second in his cricket career. With the magic of his spin, he won the match for Pakistan many times, but now this player has done such a thing, after which Pakistan and him are being made fun of. Saeed Ajmal gave an interview to Australian batsman Usman Khawaja, in which he was seen speaking wrong English. Not only this, he also abused during the interview.
Usman Khawaja recently started his YouTube channel and he interviewed former off-spinner Saeed Ajmal. Saeed Ajmal’s English is weak but despite this he agreed to give interview. Usman Khawaja asked Saeed Amjal a question on the ban imposed on him, after which this off-spinner rained down on the ICC. Ajmal got so excited while answering in English that he even abused him.