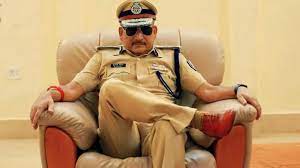 Patna, 27/6 (AO Bureau):Gupteshwar Pandey, the former DGP of Bihar and now the storyteller, has accepted his defeat in politics. After leaving the post of DGP, Gupteshwar Pandey tried his luck in politics but failed. After this, he remained incognito for a few months but suddenly came into the limelight once again with the appearance of the narrator. Meanwhile, he made a big statement about CM Nitish Kumar and said that CM Nitish Kumar has not cheated me.

It was wrong to dream of getting into politics

Gupteshwar Pandey, who took VRS six months before retiring from the post of DGP, had joined JDU. Chief Minister Nitish Kumar himself had included him in the party. Even before joining JDU, he was preparing to contest from Buxar seat. After joining JDU, he started preparing for the election vigorously, but Nitish Kumar could not get him a ticket at the last moment, so Gupteshwar Pandey, who took VRS before time, was neither Ghar Ke Rahe nor Ghat Ke. After that they separated completely. Today, he said in the conversation that Chief Minister Nitish Kumar has not cheated me. He said that no one leaves the job of DGP just for the ticket of MLA. I have only faith in God. It was wrong to dream of joining politics.

Talking to News18 in Patna, former DGP Gupteshwar Pandey said that now I am not interested in anything other than God. I have been doing storytelling since before. This one is not of today but I have been reciting Bhagvad Gita for a long time. If someone put a picture on social media, now people know that I am also a narrator.

i failed in politics

Former DGP Gupteshwar Pandey further said that I have failed in politics. They got a chance but we failed in that. Pandey said that doing politics is not such an easy task. He further said that I do not have the qualifications needed to do politics. Every man wants to become MLA and minister, but to become a leader, he needs a lot of qualities and high qualifications. Gupteshwar Pandey accepted that I do not have that ability. I don’t deserve that.

Offers from home and abroad

Gupteshwar Pandey further said that I am getting calls from country and abroad to read the story. People from many countries have contacted. We do story reading only for the purification of the mind. Now I am not much interested in worldly things. It is known that after the picture of wearing khadi after khaki and now wearing ocher clothes, the former DGP was getting a lot of humiliation. In the midst of these discussions, Gupteshwar Pandey came forward and gave his clarification on every issue. The former DGP made it clear that he has failed in politics and he does not have the ability to become a politician.

Will Coronavirus 3rd wave will come because of delta plus variant?