RSS chief Mohan Bhagwat said – Hindu or Muslim, the DNA of all Indians is the same 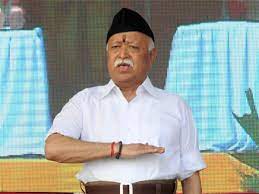 New Delhi, 4/7 (AO Bureau): Rashtriya Swayamsevak Sangh (RSS) chief Mohan Bhagwat said on Sunday that the DNA of all Indians is one. Addressing a program organized in Ghaziabad, Uttar Pradesh, Mohan Bhagwat said, ‘It has been proved that we are descendants of the same ancestor for the last 40,000 years. The DNA of the people of India is the same. Hindus and Muslims are not two groups, there is nothing to unite, they are already together.

In fact, the RSS chief was addressing the release of the book ‘The Meetings of Minds: A Bridging Initiative’ written by Dr. Khwaja Iftikhar Ahmed. He said, “The Sangh stays away from politics. The lynchings are against Hindutva. I had also said in Delhi speech that if a Hindu says that not a single Muslim should live here, then that Hindu will not remain a Hindu and this is not the first time I have said this, it has been going on… today I have been placed at the top of the Sangh. I speak but it has been said from the beginning that when the Sangh was small, it was not listened to. We all have the same ancestors. The interests will be different but the society is one.

Ban On Drone In Sri Nagar