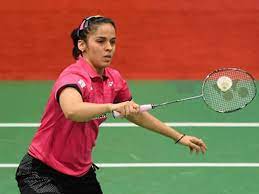 In a tweet on Saturday night, Saina congratulated the Chief Minister for the landslide victory of the BJP in the election of the post of District Panchayat President. About one and a half hours later, RLD President Jayant Chaudhary made a strong comment on this by tweeting. Using the terminology used in badminton, she tweeted, “Government shuttlers extolling BJP’s ability to crush mandate. I understand that voters need to play hard drop shots at celebrities trying to influence their decision.

BJP and its allies won 67 seats out of 75
Significantly, the BJP claimed a massive victory in the elections held on Saturday for the post of District Panchayat President in 53 districts of Uttar Pradesh. Earlier, out of 22 district panchayat presidents elected unopposed, 21 belonged to the BJP. The party claims that in 67 out of 75 districts, candidates of it and its allies have occupied the post of Zilla Panchayat President.

Expressing happiness over the victory of BJP in the election of District Panchayat President posts, Chief Minister Yogi Adityanath said in a tweet on Saturday, “BJP’s historic victory in the election of District Panchayat President in Uttar Pradesh is the result of the public welfare policies of the respected Prime Minister. This is a manifestation of public confidence in the established good governance in Uttar Pradesh. Thanks to all the people of the state and hearty congratulations for victory.

Odisha Transport Minister Padmanabha Behera announced that flight services from Puri will commence in the year 2022-23.