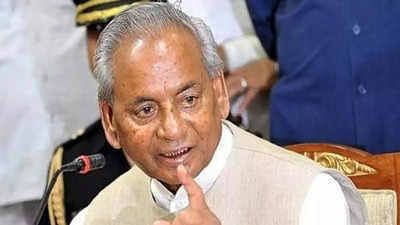 Rajasthan,22/8:Kalyan Singh, one of the veteran leaders of BJP and former Chief Minister of Uttar Pradesh, died on Saturday evening. At this time all the stories and records related to him are in discussion. Meanwhile, BJP’s strong leader, Kalyan Singh, breaking the record of 52 years as the Governor of Rajasthan is also in the headlines. Actually, in the history of Rajasthan, no governor could complete his term in 52 years, but Kalyan Singh broke this record on 2 September 2019.

kalyan singh broke record
23 governors, including Kalyan Singh, were appointed for a full 5 years, but except him, no one could complete his term. Although Baliram Bhagat 4 years 10 months, Anshuman Singh 4 years 8 months, Jogendra Singh 4 years 7 months and Raghukul Tilak remained in this post for the maximum tenure of 4 years 3 months. At the same time, only three people completed their tenure. These included Sawai Mansingh as Raj Pramukh from 30 March 1949 to 31 October 1956, followed by Gurmukh Nihal Singh from 1 November 1956 to 15 April 1962 and Dr. Sampurnanand from 1962 to 1967. Was governor for 5 years.

By the way, Kalyan Singh was the governor in the governments of two different parties. When he came as the governor in 2014, there was a government of Vasundhara Raje in Rajasthan. At the same time, when his term ended on 2 September 2019, the Congress government was there. Not only this, CM Ashok Gehlot had completed the tenure of 8 months.