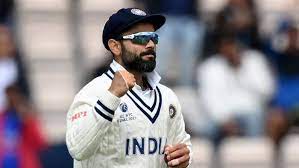 New Delhi,26/8:  Even at the age of 39, England’s fast bowler James Anderson continues to shine. Reading the swinging balls of Anderson, who has been playing international cricket for 18 years, is still not easy for any batsman, even if it is Indian captain Virat Kohli. In the ongoing Test series between India and England, Anderson has made captain Kohli his victim for the second time. In the third test match being played in Leeds, once again Kohli dodged Anderson’s ball and caught Jos Buttler behind the wicket. Anderson has dismissed Kohli for the 7th time in Test cricket.

After the way Team India had won at Lord’s, it seemed that this feat would be easily repeated in Leeds as well. However, Anderson stood as a wall between Team India and England. After winning the toss, Kohli decided to bat but Anderson single-handedly proved his decision wrong. In the very first over, Jimmy sent KL Rahul back to the pavilion without opening the account. After this, out-of-form Cheteshwar Pujara once again teased the ball going out of Anderson’s off-stump and caught Jos Buttler behind the wicket. After losing 2 wickets, Team India was expecting from Virat Kohli but Anderson also trapped him in his net.