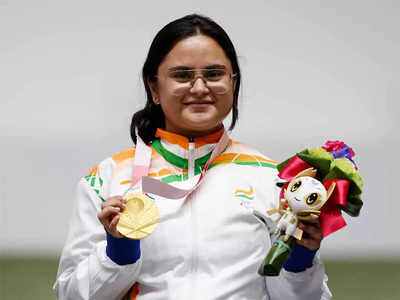 Tokyo, 30/8: Indian shooter Avani Lekhara did wonders in the Tokyo Paralympics 2020. He created history by hitting a golden target on Monday. Be it Olympics or Paralympics… the crown of becoming India’s first golden girl was adorned on Avni’s head. Avani topped in Class SH1 of Women’s 10m Air Rifle. She entered the finals by finishing 7th among 21 shooters in the qualification round. Avani Lekhara is the third Indian to win a medal in Paralympics. Before him, Bhavina Patel and Deepa Malik have also won medals in these games.

Golden Girl of India Avani is the first Golden Girl of India. Till date no Indian woman has won gold in Olympics. PV Sindhu and Mirabai Chanu won the silver. In such a situation, Avani has become the first Indian woman player to win gold in Olympics or Paralympics. She is only the fourth Indian player to win gold at the Paralympic Games. The first gold was won by Murlikant Petkar in the 1972 Paralympics. Second and third by Devendra Jhajharia and fourth by Mariyappan Thangavelu.