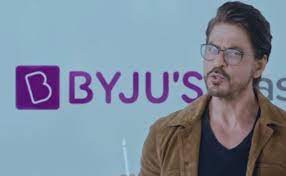 Mumbai, 9/10:Bollywood actor Shah Rukh Khan, the father of Aryan Khan, accused in the cruise party drugs case, has suffered a major setback. Actually, the country’s largest edtech start-up company Byju’s has stopped all advertisements of Shahrukh Khan. Let us tell you that Shahrukh Khan is the brand ambassador of Byju’s since the year 2017.

According to media reports, Byju’s has stopped all their advertisements despite booking in advance. Byju’s was the biggest brand in King Khan’s sponsorship deals. Apart from this, Shahrukh Khan has advertisements for companies like Hyundai, Reliance Jio, LG, Dubai Tourism. According to reports, Byju pays Rs 3-4 crore annually to King Khan for endorsing the brand.