Big news about ‘Sooryavanshi’, Rohit Shetty is going to have a big blast on Diwali 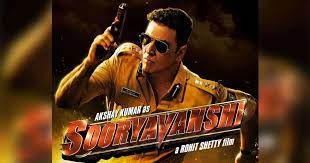 Mumbai, 20/10:As soon as there is relief after the corona epidemic, the film that the audience is eagerly waiting for is Sooryavanshi. The film directed by Rohit Shetty will be released in theaters on the auspicious occasion of this Diwali. The released trailer of the film has increased the enthusiasm of the audience. Not only Rohit, but the eyes of the entire Bollywood are also on the release of this film. Rohit has made special arrangements to release the film on November 5.

Rohit Shetty is busy in planning to bring the audience to the theatre, due to which the audience would prefer to watch the film in the theater itself. According to the news of Bollywood Hungama, Rohit will release the film ‘Sooryavanshi’ with 5000 prints across the country. Film pundits are also very excited and positive about this film. Rohit Shetty is trying to make his cop franchise dream project successful.

China will get a befitting reply, Bofors artillery deployed on LAC in Arunachal