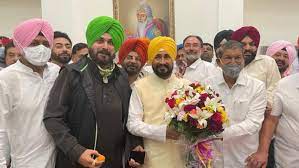 Chandigarh, 2/11:Punjab Chief Minister Charanjit Singh Channi has refused to accept the resignation of APS Deol as the Advocate General of the state. Sources gave this information on Tuesday. Deol on Monday submitted his resignation letter to Chief Minister Channi after attacks by Punjab Congress President Navjot Singh Sidhu.

APS Deol had submitted his resignation to the Chief Minister on Monday after being targeted by Punjab Congress chief Navjot Singh Sidhu. In fact, two accused in the APS Deol sacrilege and police firing case were representing the policemen. In such a situation, there was a demand of Sidhu that he should be removed from this post. There is a constant demand from Sidhu to change the DGP and Advocate General of Punjab.