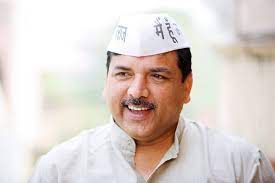 Lucknow, 16/1:  The Aam Aadmi Party, which is trying its luck for the first time in the Uttar Pradesh Assembly elections, has also released its first list of 150 candidates. UP in-charge and Rajya Sabha MP Sanjay Singh released this list on Sunday by holding a press conference in Lucknow. Aam Aadmi Party has also included 8 MBAs, 38 post graduates, 4 doctors, 8 PhDs and 7 engineers in its first list. Apart from this, there are 8 BEd, 39 graduate, 6 diploma. On the other hand, there are 55 OBC candidates, 31 Scheduled Castes, 14 Muslims, 6 Kayasthas and 36 Brahmin candidates.

Sanjay Singh said in the press conference that in order to sweep the politics of change and dirty politics, it has been decided to field candidates on all 403 assembly seats of the state with the central consent of Delhi Chief Minister Arvind Kejriwal and the party. Out of these, the first list of 150 seats has been released today. Among the eligible candidates whose names have been agreed upon by Kejriwal and the central leadership are 8 MBA, 38 Post Graduate, 4 Doctor, 8 PhD and 7 Engineer, 8 BEd, 39 Graduate and 6 Diploma holders. On the other hand, there are 55 OBC candidates, 31 Scheduled Castes, 14 Muslims, 6 Kayasthas and 36 Brahmin candidates.