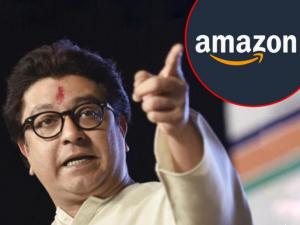 Mumbai, 26/12 (AO Bureau): Maharashtra Navnirman Sena activists vandalized the office of online marketing company Amazon in Mumbai on Friday. MNS has been demanding to include the Marathi language in the Amazon app for quite some time. The Mumbai Police is investigating the case on the complaint of the Amazon company. MNS workers in Pune have started the campaign ‘No Marathi, No Amazon’.

The police officer said an LED TV, glassware, laptop, printer, etc. have been damaged in the attack. He said that the process of filing an FIR against eight people is going on at the Sakinaka police station. The e-commerce company had earlier approached the city’s Dindoshi court, after which MNS chief Raj Thackeray was issued a notice and was directed to appear in the court on January 5. MNS activists said that the notice sent by Amazon to MNS chief Raj Thackeray is illegal.