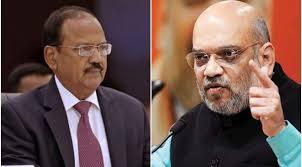 New Delhi, 4/2:  Ahead of the nationwide “Chakka Jam” on February 6, Union Home Minister Amit Shah has called for a high-level meeting with NSA Ajit Doval, the Director of the Intelligence Bureau Arvind Kumar, and Delhi Police Commissioner SN Shrivastava. The meeting was regarding the proposed call for a nationwide ‘chakka jam’ on February 6 (Saturday).

“We will block both state highways and national highways for three hours from 12 noon to 3 pm on February 6. We will protest for our demand of complete rollback of farm laws, against the repressive measures being taken across Delhi, and against anti-farmer and pro-corporate budget,” he said at a press conference organized by Samyukt Kisan Morcha.

“I still stand with Farmers” Greta’s reply to the haters