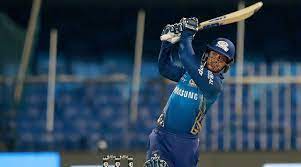 New Delhi, 29/4 (AO Bureau):Mumbai Indians (MI) registered their third win in IPL 2021 (IPL 2021). The team defeated Rajasthan Royals (RR) by 7 wickets in a match. Mumbai’s team remains at number four in the table with 6 points. On the other hand, this is Hyderabad’s fourth defeat in 6 matches. The team is at number 7. Rajasthan scored 171 runs for 4 wickets in the first play. In response, Mumbai achieved the target for three wickets in 18.3 overs.

Mumbai got off to a good start after chasing the target. Quinton De Kock (70 *) and captain Rohit Sharma (14) added 49 runs in 6 overs for the first wicket. Rohit was dismissed by Chris Morris. After this, Suryakumar Yadav (16) landed some good shots. But he could not play a big innings. He was also dismissed by Morris. After falling two wickets for 83 runs, Dickock and Krunal Pandya (39) added 63 runs for the third wicket. Pandya faced 26 balls. Hit 2 fours and 2 sixes. Pandya bowled over Mustafizur’s ball.

Earlier, despite the excellent performance of the top-order batsmen, the Rajasthan Royals team could score 171 runs for 4 wickets. Captain Sanju Samson (42), Jos Buttler (41), Shivam Dubey (35) and Yashasvi Jaiswal (32) played useful innings. For Mumbai, Rahul Chahar (two wickets for 33 runs) was the most successful bowler, while Jasprit Bumrah took one wicket for just 15 runs in four overs. In the last four overs, the Royals team could score only 31 runs.