75 percent reservation in jobs for local youths in this state 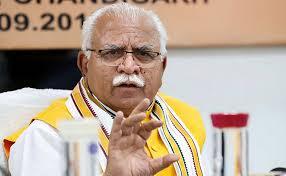 Chandigarh, 6/11:In Haryana, notification of the law to give 75% jobs in private industries to local youth has been issued. Now in private industries of the state, not 50 thousand rupees, but in jobs up to 30 thousand rupees, the youth of the state will get 75 percent reservation. It had already been approved by the Governor. But it was stopped after the code of conduct came into force in the Ellenabad by-election.

Deputy Chief Minister Dushyant Chautala said that after the end of the model code of conduct, the state government has issued a notification of 75% local reservation. Under the Haryana State Employment of Local Candidates Act, 2020, this law will be followed from 15 January 2022. Under this rule, a provision of 75% new jobs reservation has been made for local candidates in various companies, societies, trusts and firms.

UP CM Yogi took a dig at Akhilesh Yadav

Sidhu is obstructing the functioning of government: APS Deol