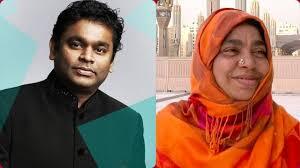 Chennai, 28/12 (AO Bureau): Karima Begum, the mother of Bollywood’s famous music composer AR Rahman, passed away today (December 28). According to the news, his mother was ill for the last few days. After his mother’s demise, Rahman shared a picture on his Twitter page and paid tribute to his mother. According to media reports, Rahman was always close to his mother and it was only on her suggestion that he came into the world of music. Because of this, he often remembered his mother during his stage shows.

At the same time, as soon as AR Rahman shared a picture of his mother on Twitter, people started commenting on that picture. People are now paying tribute to Rahman’s mother.  Rahman was born in a Hindu family. According to media reports, in childhood, Rahman was named Dilip Kumar. When AR Rahman was 9 years old, he lost his father RK Shekhar.