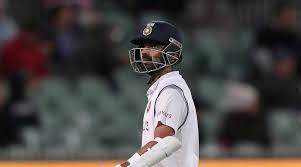 Sydney,3/1 (AO Bureau ): Team India does not want to play the fourth and last Test match of the series against host Australia in Brisbane. According to news reports, the visiting team wants to play the fourth Test match in Sydney itself, which is also the host of the third test. According to media reports, Team India says that it has already lived in the bio bubble for about a month. Before reaching Australia, the team had been in Dubai for 14-day quarantine and after reaching here again it was 14 quarantines.
This means the Indian team has been in a difficult bubble for almost a month. According to a source, if they go to Brisbane they will have to go to the bubble again and they do not want to enter quarantine at the end of the tour. According to the source, if the team has gone to Brisbane, they will be imprisoned in the hotel again. This is why Team India wants to play the fourth test in Sydney instead of Brisbane. At the same time, Australian player Matthew Wade said that they are prepared to play against India in Brisbane.

Cricket Australia said on Sunday morning that they had not been formally contacted on the matter. But both boards talk about the project. Wade said that, to be honest, I did not hear about this, but we definitely would not like to play two consecutive matches in Sydney. The schedule has been fixed and we would like to continue accordingly.