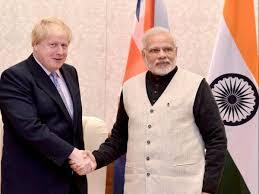 New Delhi, 5/1 (AO Bureau): British Prime Minister Boris Johnson will not attend the Republic Day celebrations on 26 January. According to a Reuters report, the UK PM has canceled the tour to India. He was to come as the chief guest of Republic Day on 26 January. In fact, cases of new strains of Coronavirus in Britain are increasing rapidly. It is being said that the UK has taken this step in view of increasing cases. Britain has enforced a strict lockdown amid the rapidly spreading threat of the coronavirus new strain, and on Tuesday Prime Minister Boris Johnson said the rapid spread of the infection was ‘very sad and worrisome’ and currently the country’s hospitals But the epidemic is under maximum pressure.

Scotland’s new law to close all schools and businesses to deal with the new wave of the epidemic went into effect from Tuesday, while the UK law will take effect from Wednesday morning. Meanwhile, Johnson has requested people to strictly follow the rules of working from home. The new law is likely to remain in effect by mid-February. It will be reviewed based on the rate of vaccination and infection. In a nationwide TV address on Monday night, Johnson said, “Our scientists have confirmed that the new strain (type) is 50 to 70 percent more contagious  which means that you are infected and others are infected.”

Union Budget to be presented on February 1!