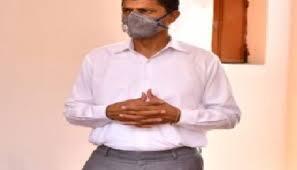 0
Share
Rourkela, 19/1 (AO Bureau): 5T Secretary VK Pandian has arrived in Rourkela. He reached in Rourkela by special helicopter. VK Pandian is accompanied by Chief Minister’s Special Secretary Vinil Krishna, Chief Secretary Suresh Mohapatra, and West Odisha Development Council Chairman Asit Tripathi. The team arrived today with a hockey stadium survey. The team visited the proposed stadium for the World Cup. The team will also review the infrastructure of the BPUT conference room.
Earlier the team visited the temple of Maa Samaleshwari and discussed in detail the development of the region. Maa Samaleshwari’s Peetha is one of the most famous Shakti Peethas in Odisha. The Samaleswari Peetha has a close relationship with the social, cultural, and spiritual life of Western Odisha. They announced the beautification and heritage corridor development of the Samaleswari Temple the presiding deity of Sambalpur.
0
Share

MPs to no longer have subsidised food in Parliament canteen