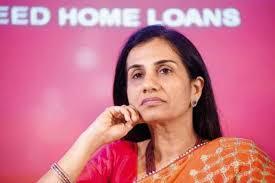 Mumbai, 12/2 (AO Bureau): Chanda Kochhar, the former CEO and MD of ICICI Bank (ICICI) appeared in a special PMLA court in the ICICI Bank-Videocon money laundering case in Mumbai on Friday. Chanda Kochhar had filed a bail petition in front of Special Judge AA Nandgaonkar through his lawyer Vijay Aggarwal. On this, the court asked the ED to file its reply on her bail application. However, the court later granted conditional bail to Chanda Kochhar on a personal bond of Rs 5 lakh. Also, the court has also said that she will not be able to leave the country without permission.

On January 30, the special court of the Prevention of Money Laundering Act (PMLA) summoned Chanda Kochhar, her husband Deepak Kochhar, Promoter of Videocon Group Venugopal Dhoot, and other accused in the case after taking cognizance of the Enforcement Directorate (ED) charge sheet. . Deepak Kochhar was arrested by the ED in September 2020 after registering a criminal case of money laundering based on an FIR filed by the CBI against Kochhar, Dhoot, and others.

The ED alleges that a committee of ICICI Bank headed by Chanda Kochhar approved a loan of Rs 300 crore to Videocon International Electronics Limited, and the next day of issuing the loan, Videocon Industries on September 8, 2009, Rs 64 crore Newpower Renewable Private Limited (NRPL). Deepak Kochhar is the owner of NRPL.

Chinese hackers are targeting India on…