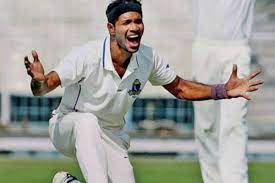 Kolkatta, 30/3 (AO Bureau)Two days before the second phase of the West Bengal elections, another attack has come to light in the state. Indian cricketer and BJP candidate from Moyna, Ashok Dinda’s car, was attacked by unknown people during the election campaign on Tuesday. Filahal detailed information about this incident has not been revealed. However, in the photographs shared by the news agency ANI, the glass of Dinda’s car is seen broken. In pictures released by ANI, Dinda is seen sitting on a bench. In the picture, he has placed his hand on the neck.

There are allegations that more than 50 unknown people surrounded Dinda’s car and started throwing stones at him. According to the information received, Dinda got hurt in the back in this attack. There are allegations that Dinda was attacked by Trinamool Congress workers. However, it has not been officially confirmed. It is being told that a report has also been sent to the Election Commission in this regard.