France President Gets Slapped in Public 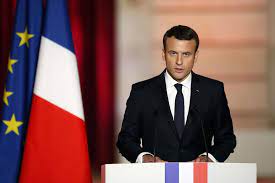 Paris, 8/6 (AO Bureau):Two people were arrested for slapping French President Emmanuel Macron. According to the news agency Reuters, French President Emmanuel Macron was slapped by a man during a walkout session with people in the Drme region of southeastern France. After which two people have been arrested. The incident happened when Macron was visiting the Dromé area in south-eastern France, where he was meeting restaurants and students and talking about how life is returning to normalcy after the COVID-19 pandemic.

France’s BFM TV and RMC Radio confirmed the incident. A video clip of this incident is going viral on Twitter. It is seen in the video that while Macron is shaking hands with people, a man wearing a green T-shirt, glasses and mask grabs his hand and suddenly slaps Macron by shouting ‘Down with Macronia’. The soldiers posted under Macron’s security immediately catch this man and drop him on the ground and take Macron away from there.