Mukul Roy to create havoc against BJP in Tripura 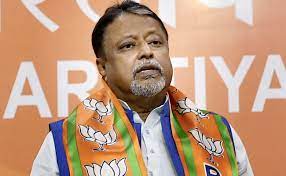 Kolkatta, 17/6 (AO Bureau): Mukul Roy, who left the Trinamool Congress (TMC) and joined the BJP before the West Bengal elections, is now back in the TMC. BJP was defeated in Bengal elections. The effect of this defeat is also being seen in Tripura. Already some people of BJP in Tripura are dissatisfied. In such a situation, the party can make a big change at the organization level to save its people from breaking up in the state. Along with this, it is believed that there may also be a cabinet expansion in Tripura. People angry with the BJP leader who went from Delhi to Tripura have also demanded a change in the organization.
The Tripura unit of BJP has been in turmoil for quite some time now. The BJP workers of the state have opened a front against even the Chief Minister. State BJP workers say that there is a need for a state president in Tripura who can strengthen the organization.
Now there is such a discussion in the state that TMC is working to break the people of BJP in Tripura. The responsibility of this has been given to Mukul Roy, who returned from BJP to TMC. At the same time, the BJP leader says that the political situation like West Bengal is not in Tripura. There is a BJP government in Tripura and TMC does not see any effect there. Mukul Roy’s talk of breaking BJP MLAs is completely wrong
More about this source textSource text required for additional translation information