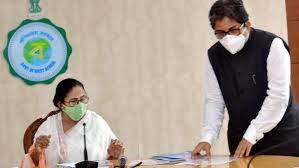 Kolkatta, 21/6 (AO Bureau):The controversy over Alapan Bandopadhyay, former Chief Secretary of West Bengal, does not seem to end. Now the Center has issued a memorandum regarding Mamta’s advisor Alapan. Action can be taken against Bandopadhyay, a retired IAS officer of 1987 cadre, under Major Penalty Proceeding. This action can be taken under Rule 8 of All India Service (Discipline and Appeal) and Rule 6 of All India Services (Death-cum-Retirement Benefits).

According to the memorandum issued on June 16, within 30 days of the receipt of the memorandum, you will have to give your side in writing. Alapan will also have to decide whether he himself wants to be personally present for the hearing. Earlier, the reply of former West Bengal Chief Secretary Alapan Bandopadhyay was received by the Ministry of Home Affairs.

The Home Ministry had issued a notice to him asking why he did not follow the rules under the National Disaster Management Act. In response, the former Chief Secretary said that he was following the procedure of the state government on the instructions of the Chief Minister.

Section 51(b) of the Disaster Management Act has also been imposed against Alapan. Let us inform that a show cause notice was sent to Bandopadhyay for his late arrival in the meeting of Prime Minister Modi. Higher officials of the Ministry of Home Affairs are assessing this answer, although no action has been taken yet. Now after MHA, DoPT has issued this memo.