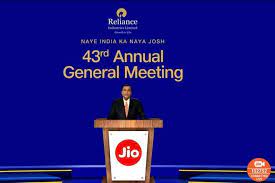 Mumbai, 24/6 (AOBureau): Many big and special announcements have been made in the 44th Annual General Meeting (AGM) of Reliance Industries. The company’s chairman and managing director Mukesh Ambani addressed the AGM. During this, he counted the big achievements of the company during the Corona period. Apart from this, he announced the launch of Jio’s new 5G ‘Jio Phone Next’ phone in association with Google. Let us tell you about the big announcement of AGM-
1. Announcement of 5G phone – Reliance announced in its AGM that it announced the launch of Jio’s new ‘Jio Phone Next’. It has been prepared in collaboration with Google. While launching this phone, Google CEO Sundar Pichai said that the internet speed of this phone will be good. This cheap smartphone of the company will be available in the market from 10th September on the day of Ganesh Chaturthi.
2. 75,000 new jobs given – Mukesh Ambani said that RIL has given 75,000 new jobs in the last 1 year. Reliance is the country’s largest custom and excise duty paying company in the private sector. We are the country’s largest merchandise exporter. We pay the highest GST, VAT and Income Tax in the country.
3. Consolidated revenue around 5,40,000 crore – Mukesh Ambani said that in the last 1 year, Rs 3.24 lakh crore equity capital has been raised. We are happy that our retail shareholders have got 4x returns from the rights issue. He said that the consolidated revenue of RIL is around Rs 5,40,000 crore. Our consumer business has grown very fast.
4. Business and Finance grew more than expected – Mukesh Ambani said that since the last AGM, our business and finance has increased more than expected, but we are most happy that we have served humanity in this difficult time. Many efforts have been made for The Reliance family has done a great job in the time of Corona, due to which our founding chairman Dhirubhai Ambani would be proud of us today.
5. Green Energy Plan – Mukesh Ambani announced the company’s green energy plan. Work has started to develop the Dhirubhai Ambani Green Energy Giga Complex in Jamnagar on 5,000 acres. 60,000 crores will be invested in this business.
6. Reliance will be global – Apart from this, Mukesh Ambani also announced Reliance Industries to be global at the AGM. He said that his global plans will be announced in the coming time. He said that Saudi Aramco’s Yasir Al Rumayyan has been inducted into the board of Reliance, this is the beginning of its becoming global.