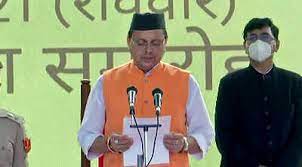 Uttarakhand, 4/7 (AO Bureau): Pushkar Dhami took  oath as the new CM of Uttarakhand in a while. On Saturday, he was elected the leader of the legislature party in the BJP government. Now Pushkar Singh Dhami will take oath as the Chief Minister in a while. Governor Baby Rani Maurya will administer the oath to him. However, the rain has disturbed a bit amidst the preparations for the swearing-in. But the preparations for the swearing-in are going on.

Born in Pithoragarh, 45-year-old Pushkar Singh Dhami will be the youngest CM of the state. Dhami, a two-time MLA, was never a minister in the Uttarakhand government, but will now take over the chief minister’s chair directly. Talking to the media on Saturday, he said that he is thankful to the party high command for giving an ordinary worker a chance to serve the state.

Odisha Transport Minister Padmanabha Behera announced that flight services from Puri will commence in the year 2022-23.

Ban On Drone In Sri Nagar