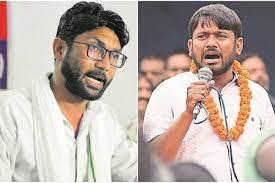 New Delhi, 28/9: Former Jawaharlal Nehru University Students’ Union president Kanhaiya Kumar and Gujarat’s independent MLA Jignesh Mewani have joined the Congress. According to sources, Hardik Patel, working president of Gujarat Pradesh Congress, has mediated the talks between these two youth leaders and the Congress leadership. It is being said that by being present at the entry of both the young leaders into the party, Rahul Gandhi has tried to give a big message.

It has also been reported that according to reliable sources of Congress, MLA Shakeel Ahmed Khan has played the biggest role in bringing Kanhaiya Kumar closer to the Congress. It is being told that he has a good rapport with Kanhaiya and it was he who got Kanhaiya Kumar to meet Rahul Gandhi. In fact, Shakeel was also roaming with Kanhaiya in Bihar in the movement against the Citizenship Amendment Act (CAA). However, an important role of election strategist Prashant Kishor is also being considered in this. Actually, under the guidelines of PK, Rahul Gandhi is making a new team of youth leaders. Kanhaiya’s role in them is considered important. It is believed that the Congress wants to use Kanhaiya Kumar in the UP assembly elections 2022 at many levels.

Kanhaiya contested Lok Sabha elections in 2019, Jignesh is currently MLA in Gujarat
Originally from Bihar, Kanhaiya came into limelight after his arrest in JNU for allegedly raising anti-national slogans. He had contested the last Lok Sabha elections from Begusarai Lok Sabha seat in Bihar as a CPI candidate against Union Minister Giriraj Singh, however lost. On the other hand, Jignesh, who belongs to the Dalit community, is an independent MLA from Vadgam assembly constituency of Gujarat.