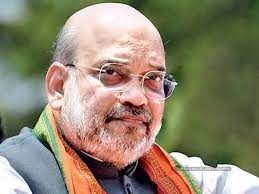 New Delhi: Union Home Minister Amit Shah on Thursday held a meeting to review the preparedness to deal with floods in the monsoon season.

He also took stock of the preparations made by the National Disaster Response Force (NDRF) and the National Disaster Management Authority (NDMA) in the flood-affected areas, and reviewed the long-term measures to formulate a wide and comprehensive policy to mitigate flood-related problems in the country.

Shah directed the officials to continuously strengthen the coordination between the Central and state-level agencies by establishing a permanent system to provide detailed predictions up to the local level of floods and rise in water levels in the major catchment areas of the country.

The Home Minister said that during the current flood season, the present and forecasted river levels should be monitored every hour and during floods, all concerned stakeholders should take appropriate measures.

He directed the NDRF to prepare SOPs in consultation with the states for issuing early rain warnings at the local, municipal and district levels in areas witnessing heavy rainfall.

Shah advised the specialised institutions like the India Meteorological Department (IMD) and the Central Water Commission (CWC) to continue to upgrade their technologies for more accurate weather and flood forecasting, and directed for timely dissemination of warnings about lightning to the public through SMS, TV, FM radio and other mediums.

He also directed to make the ‘Damini’ app available in all local languages. The app gives lightning warnings three hours in advance and can help minimise the loss of life and property.

The Director General of IMD and the Chairman of CWC informed the meeting about the actions taken on the directions issued by the Home Minister in the flood review meeting held last year.

Why look for Shivling in every masjid: RSS chief Mohan Bhagwat on Gyanvapi row