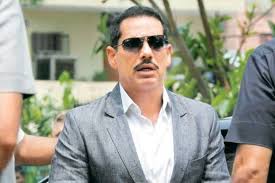 New Delhi, 4/1 (AO Bureau):In the case of Benami property, the officials of the Income Tax Department on Monday recorded the statement of Robert Vadra, the husband of Congress General Secretary Priyanka Gandhi Vadra. The source of an IT department associated with the investigation informed the news agency ANI. The source said that an IT team has reached Robert Vadra’s office in Sukhdev Vihar to record the statement in the case of Benami properties.

Robert Vadra is accused of money laundering in London’s Bryanston Square for buying a house valued at £ 1.9 million. Vadra is currently out on anticipatory bail. Apart from the IT department, the Enforcement Department (ED) is investigating them under the provisions of Money Laundering (PMLA).

Congress not proud of anything Indian : JP nadda