S Sreesanth returns to List A cricket after 10 years 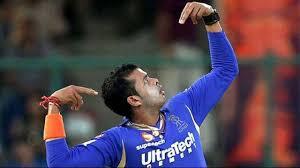 Kerala, 20/2 (AO Bureau) Kerala fast bowler S Sreesanth landed on Saturday to play a List-A match after 10 years. S Sreesanth came back strongly against Odisha and took 2 wickets for 41 runs in 8 overs in the very first match. Let us tell you that Sreesanth played his last List A match in the final of the 2011 World Cup.
India captured the World Cup on 2 April 2011 and Sreesanth was dropped from the ODI team after this match. Sreesanth played his last international match against England at the Oval ground in 2011.

Sreesanth sent two batsmen from Odisha’s top order to the pavilion in the first match of the Vijay Hazare Trophy. He dismissed Sandeep Patnaik and S Senapati. On seeing this performance of Sreesanth, the fans saluted him on social media

Steven Smith may not play IPL this year!