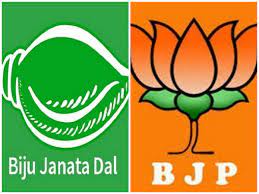 Bhubaneswar, 5/6 (AO Bureau):The BJD and BJP have been at loggerheads over the Sustainable Development Goals (SDGs) report released by the Policy Commission. According to the BJP, Odisha is in a state of poverty. Similarly, the BJD has questioned the SDG report and said the state’s development is in good shape.

According to sources, Odisha was ranked 14th in the SDG report. However, after the report was released, Bhubaneswar MP Aparajita Sarangi criticized the state government. At the press conference, Aparajita asked the BJP five questions, saying that even after the BJD had ruled the state for 21 years, 33 per cent of the people in the state were still below the poverty line. Odisha ranks third in poverty alleviation, sixth in hunger, and second in economic development. It is a shame that Odisha ranks fifth out of 24 states. “It is a betrayal of four and a half crore Orissans,” he said.

The BJP, on the other hand, has opened its mouth after BJP MP Aparajita targeted the state government. At a press conference, Rajya Sabha MP Amar Patnaik questioned the process of data collection by the Policy Commission. “The SDG is not a political report, so the report should not be politicized,” he said. According to the latest report, Odisha got 51 marks in 2014, 58 marks in 2017 and 71 marks in 2020. The report does not comment on the value or accuracy of the information which was allegedly leaked to third parties.