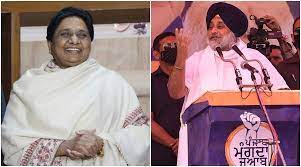 Chandigarh, 12/6 (AO Bureau):The board of new equation has been laid in Punjab. After nearly 25 years, Shiromani Akali Dal (SAD) and Bahujan Samaj Party have formed an alliance. SAD President Sukhbir Singh Badal has described it as a new dawn in the politics of Punjab. Whereas BSP General Secretary Satish Chandra Mishra said that today is a historic day and a big event in Punjab’s politics.
Earlier, the SAD had an alliance with the BJP, but the Badal-led party left the National Democratic Alliance (NDA) over three agricultural laws passed by the Center last year. In alliance with SAD, BJP used to contest 23 seats.
alliance on these seats
The BSP will contest 20 of the 117 assembly seats in Punjab, the rest will come under the SAD. In BSP’s part, Jalandhar’s Kartarpur Sahib, Jalandhar West, Jalandhar North, Phagwara, Hoshiarpur Sadar, Dasuya, Chamkaur Sahib in Rupnagar district, Bassi Pathana in Pathankot district, Sujanpur, Amritsar North and Amritsar Central etc. have come.
defeat in civic elections

Analysts say the SAD parted ways with the BJP after the controversial agriculture law was passed by the Lok Sabha, but it failed to dispel the notion that it did nothing to stop the bill from being passed. The Akali Dal could not perform well in the municipal elections held after this law was passed.