Pushkar Singh Dhami to be the next CM of Uttarakhand. 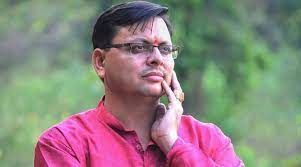 Who is Pushkar Singh Dhami
Pushkar Singh Dhami, a second time MLA from Khatima assembly seat of Udham Singh Nagar, has been made the new Chief Minister of Uttarakhand. Dhami, 46, is a youth leader of the BJP and the youngest among all the Chief Ministers made in Uttarakhand so far. Dhami was born on September 16, 1975 in Tundi village of Tehsil Didihat of Pithoragarh, a border district of the state. He belongs to a military family and is the brother of three sisters. His father was a former military officer. Dhami’s early education took place in the village and did higher education from Lucknow University. Pushkar Dhami is a Post Graduate in Management. Dhami is considered close to Bhagat Singh Koshyari, a former Chief Minister and currently the Governor of Maharashtra and Goa. But his image has been that of an undisputed leader. For Dhami, the chair of the head of Uttarakhand is not going to be so easy.