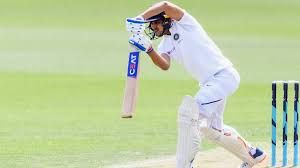 Sydney, 8/1 (AO Bureau): The honors shared by both India and Australia as India ended day 2 of the SCG test at 96-2, with Rahane and Pujara at the crease. India now trails by 242 runs. India lost two quick wickets after a steady start by Rohit Sharma and Shubman Gill. Both of them added 70 runs before Rohit was dismissed for 26. Gill followed him soon after scoring his maiden fifty. Since then Pujara and Rahane battled out remaining overs and made sure India didn’t lose another wicket. For Australia Cummins and Hazlewood picked up a wicket each.

Earlier Australia began their innings at 166-2 with Marnus Labuschagne and Steve Smith as overnight batsmen. Laguschagne was all set for a big hundred before getting out at 91 to Ravindra Jadeja. Steve Smith continued the attack and scored a well-deserved hundred to get rid of his poor form. Australia was looking at a big score on a flat SCG wicket but no other batsman got runs. Australia ended their innings at 338 with Smith falling as the last wicket to a direct throw by Jadeja. Ravindra Jadeja was also the star performer with the ball with 4 wickets, on a pitch where the pitch had very little for spinners. Bumrah and Saini picked up two wickets each and Siraj picked up one wicket.

Day 3 in Australia is referred to as moving day, Teams either consolidate or fall like a pack of cards. India is in a decent situation at the moment, the pitch doesn’t have anything for the bowlers. India should seize the opportunity and put big runs on the board. Australia will look to attack more and get India out cheaply tomorrow.