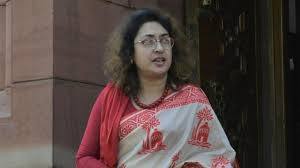 West Bengal, 15/1 (AO Bureau): Ahead of the upcoming West Bengal Election,  there is speculation that TMC MP Shatabdi Roy, who is angry with the ruling Trinamool Congress of West Bengal, will join the BJP. She is reaching New Delhi on Saturday and it is being said that she will meet Union Home Minister Amit Shah here. In such a situation, if she leaves the party, there will be another major setback for the Mamata Banerjee-led TMC ahead of the assembly elections in the state in the next few months.

However, Shatabdi Roy has clarified this on Friday. Talking to news agency ANI, TMC MP Shatabdi Roy said – TMC is facing a lot of difficulties. The Facebook post from me is correct. If I am going to Delhi, it does not mean that I am joining BJP. I am an MP and can go to Delhi.

Wait is Over! Coronavirus vaccination to start from tomorrow

9 People dead in an earthquake in Indonesia