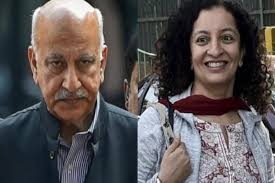 New Delhi, 17/2 (AO bureau): A defamation suit filed against journalist Priya Ramani has been dismissed by the Delhi court. The court has said that the woman has the right to put forward her complaint even after decades. A case was filed against Ramani by former Union Minister MJ Akbar. The court acquitted Ramani after a case that lasted for about two and a half years. The court admitted that the tweet by Ramani did not defame Akbar. Let me tell you that during the Ramani Me too Movement, many questions were raised on Akbar.

Akbar filed a complaint against Ramani on 15 October 2018. In his complaint, he had said that Ramani had defamed him decades ago by making false allegations of sexual misconduct. He resigned as Union Minister on 17 October 2018. Akbar dismissed the allegations of all the women standing against him during the Me Too campaign.