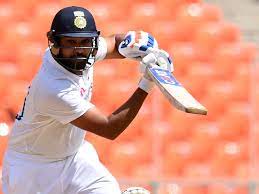 New Delhi, 17/6 (Ao Bureau): Star opener Rohit Sharma is counted among the legendary cricketers of limited overs, now he has proved himself in the Test format as well. Some time ago Rohit’s Test career was not going well. After the 2019 World Cup, he was not selected in the Playing XI for the West Indies Test but with KL Rahul facing the new ball consistently, the Indian team management had to think about Rohit. Former chief selector MSK Prasad has told how the team management decided to go with the limited overs vice-captain as the opener in Tests.
Rohit had scored five centuries in the 2019 World Cup played in England and many believed that he should be given the opportunity to open in the longest format of the game. At the same time, Prithvi Shaw was also out of the team due to some reasons. Prasad revealed that his centuries in England during the World Cup played a big role in making him a Test opener. He also told that there was a lot of discussion about this with the team’s coach Ravi Shastri and captain Virat Kohli.
Prasad told Cricbuzz, ‘Rohit has done brilliantly in the white ball format in the last few years, there is no doubt about it. When someone scores five centuries in the ODI World Cup in England, you have to focus on them. We saw Prithvi Shaw, he got off to a great start but then his fitness deteriorated, his form fell and he was out of the team for whatever reason. Mayank was there but there was concern about the second opener. We wanted to go with someone reliable and experienced.