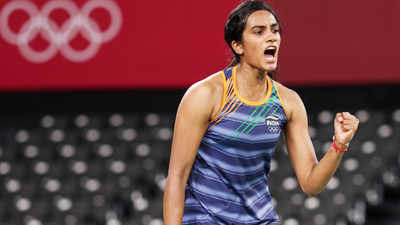 In the match against Bing Xiao, Sindhu showed an aggressive game from the beginning and took an 11-8 lead in the first game. After this took the lead 16-10, 19-12 and won the first game 21-13. In the second game too, the Indian shuttler started well and took a 5-2 lead. After losing the first game, Bing Xiao appeared to be under some pressure, so that his shots were also out.

In the second game against Hyderabad’s 26-year-old shuttler Sindhu, Bing Xiao also tried to make a comeback and scored 6-8. Sindhu, however, maintained the lead by making fewer mistakes and reduced the score to 11-8. Bing Xiao again leveled 11-11 but world champion Sindhu took a 16-13 lead and then won the game 21-15 to claim the medal. This is India’s second medal at the Tokyo Olympics. Earlier, weightlifter Mirabai Chanu opened India’s medal account by winning the silver medal.

Sindhu, who won gold at the World Championships in 2019, had earlier lost to Tai Tzu Ying of Chinese Taipei in the semi-finals. With that defeat, she missed out on a place in the final and was out of the race to win gold. Sindhu was earlier defeated by world number-1 shuttler Tai Tzu-Ying in straight games. Then the Indian fans were hoping that by winning the bronze, she could become the Indian shuttler to win medals in two consecutive Olympics, but this also could not be possible.

Tokyo Olympics, Hockey: India enter the semi-finals of men’s hockey after 49 years, now one step away from medals